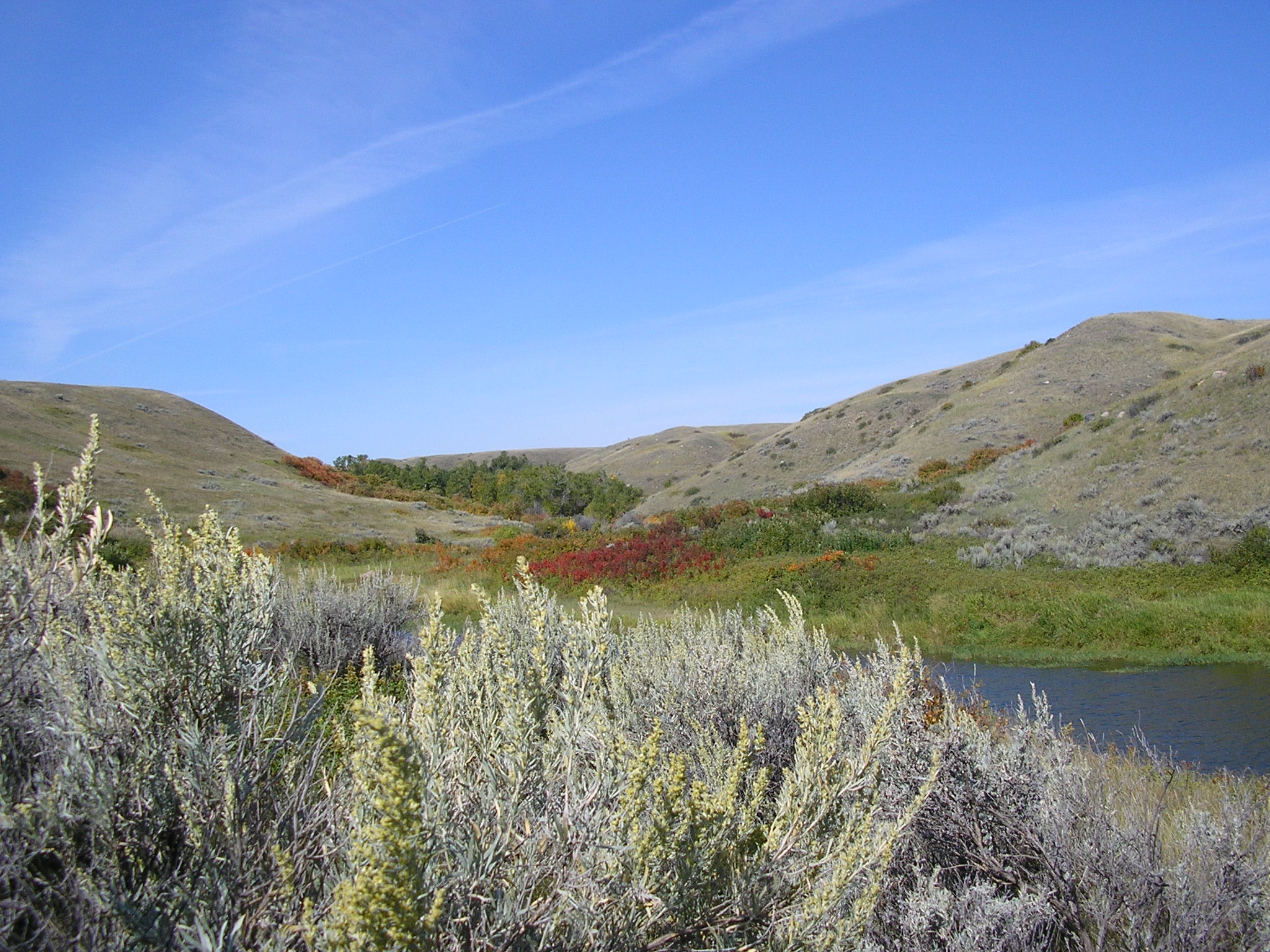 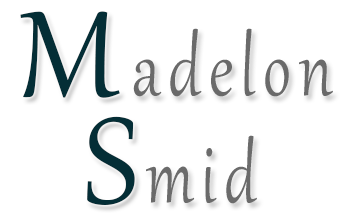 A Place of Beauty – Bow Island to Medicine Hat

My first interest in this stretch of water came from reading several blogs. The photos promised some glorious scenery, unlike the usual rolling hills and cut banks I see along my piece of the South Saskatchewan River. I took a year to ponder, then, with two friends eager to go along I started on a kayak trip which far exceeded my expectations.

Day One we met in Medicine Hat on July 21. The 6:00 a.m. start allowed us to load the third kayak and equipment into our truck. It came with my paddling buddies from Calgary, while I transported two kayaks. We made the forty-five kilometre drive from Medicine Hat to Hwy 879, a few km north of Bow Island. I had been told there was easy access on either side of the bridge that crossed the river there. This was incorrect. On the north side there was a padlocked gate on one side of the highway and a deep ditch on the other, preventing access. On the south side we could get in only by opening a ranchers gate, marked no trespassing (it wasn’t locked) and taking a curving trail to the river. Prepping kayaks usually takes about thirty minutes. In this case we had a two hour wait, while my husband, Den, who’d volunteered to ferry us, drove back to retrieve a forgotten tent. It was 9:20 when we lifted our paddles in a goodbye wave and launched ourselves into quiet water. The temperature was 28 degrees Celsius, but with a good breeze blowing, and a wet hat, I found it fairly comfortable on the water. 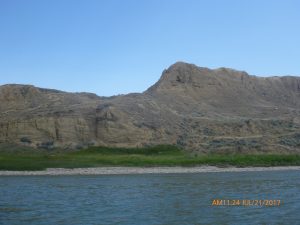 In a fortunate moment, a friend in Medicine Hat loaned me a book I found an excellent resource. Prairie River written in 1996 by two local men, Donn Dickinson and Dennis Baresco, covers stretches of river from Grand Forks to Estuary. We began on what they called stretch two, Cherry Coulee. Pastureland stretched along the south bank, for the most part, while on the north we saw our first hoodoos carved from the  limestone by wind and rain. We began nineteen kilometres downstream from Grand Forks, so I calculated we had a seventy-five kilometre paddle ahead of us. I wanted to make at least twenty-five kilometres on the first day. Fluffy clouds gamboled over the hills in the west as we paddled, and grew in size, causing sporatic gusts of high wind. By 3:30 p.m. I guestimated we’d already paddled that or more, assisted by a two-to-three km/hr current and the strong wind out of the southwest. We were now quartering into it, and the next turn in the river would make it a head wind. We decided to get off the water.

Our campsite was not ideal, but we could find no other protected from the wind. Setting up our tents became a three person job, with the wind flipping ground tarps, flapping corners away from pegs, and tearing the fly from my hands. When all three were up, I crawled inside mine and had a nap. The wind increased to forty, gusting fifty over the next hours. Because of the heat wave and no rain there was a no fire ban posted throughout Alberta. The wind was so fierce we couldn’t keep our propane stove lit. We finally gave up on cooking dinner and ate it cold. It was delicious, and satisfied hunger made sharp by a long day of travelling. 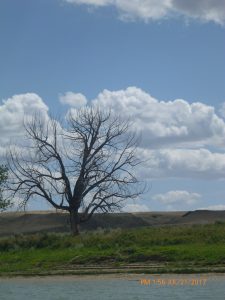 It seemed 9:20 a.m. would be the standard time we hit the water, because that’s exactly when I took my first stroke Day Two. Prairie River called this stretch 3, Petrified Coulee, and I looked forward to more of the amazing scenery we’d had glimpses of the day before. The land along the river is mostly government owned and leased by ranchers. It seemed wherever there was a great spot to stop, the cows had dibs. There were many bucolic scenes of green grass, shady poplar and willows, and grazing cattle. These contrasted dramatically with the towering sandstone and limestone edifices that became more frequent. Their rocky silhouettes formed exciting patterns against the endless blue sky and Mother Nature had carved intricate patterns on their wide surfaces. 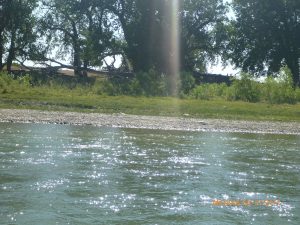 In this stretch we ran into an increasing number of rapids. The river was low, but not at its lowest, so often we were cruising six to twelve inches above its rocky bed. Level one to two rapids stretched across its width, lifting us from the monotony of stroke, stroke, to steer our way through large boulders jutting above the surface, as we raced past. Yes, I admit I scraped over several, with no harm done.

Again we stopped at 3:30 pm. Making camp was easy, with the air still and quiet. We found a good location on the south shore and set up. Again the unexpected happened, dinner over, a few hands of cards enjoyed, and tucked in my tent, I listened to the wind rise. By 10:00 pm it was gusting fifty km/hr and I was filling sand bags to reinforce my ground wires. Throughout the night I woke at one hour intervals, worrying about tents lifting. A big bonus was taking in the night sky, with stars so close and brilliant they left me wordless with awe. All the worry and lack of sleep was a waste, for we woke to the reflection of towering cliffs and clumps of trees reflected on the glassy surface of the river.

Day 3 back on the water 9:35. Surprise Bluff reach. My husband and a pilot friend of his indicated they might take the plane up and come looking for us that day. Just before we finished breakfast a plane came down the river, and as we were loading another single-engine plane circled and flew away. Neither dipped their wing, indicating they had seen us, even though we were standing on the shore waving. Our three bright coloured kayaks were strung out along the white pebbled beach, and our tents on a ridge shaded by, but not under, the trees. I decided they couldn’t be our guys. We learned later they had flown down the river on both sides and failed to see us; and concluded we won’t use them on a search and rescue team. There is room for a serious note, here, in that they have both been on multi search and rescues, and say you can fly over the downed plane, or tents and kayaks, many times without seeing them. So don’t count on being a visual aid for searchers if you get in trouble – go big with smoke, or reflective light.

By my calculations we had paddled sixty kilometres and only had a short three hour paddle ahead. 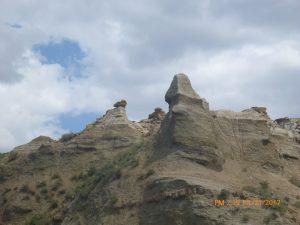 The scenery was still stunning, with one monument after another carved from the rocks. The river seemed lower here and often we floated only inches above the rocky bed. At my first sighting of a tower, I tried my phone, got a signal, and my husband at the other end. He was on a high point downstream and could see us through binoculars. We were moving fast – only an hour out of the take out point I’d chosen – Echo Dale park on the west end of Medicine Hat. Low water, big rocks and turbulence held my attention for the rest of the way in. We had to go around one large island just before the park. Calling out to a man on the shore we were told the south side was the only way. Here the waters rushed into noisy thrusting waves, bouncing us from crest to crest. Adrenaline sang through my body, as I paddled hard to avoid rearing rocks. It was a fun rush and good practice for bigger rapids on my next adventures.

Ahead, Den stood on a point, capturing our arrival on his phone. The launch was fifty feet beyond him, paved and in good condition, with a pier alongside. My friend got hung up on a gravel bar just short of the launch. Several kayaks and a boat were just going into the water, so I made a wider circle and wove my way between them through deeper water. I recommend you take time to enjoy the park. Medicine Hat has done a splendid job of creating a  multi purpose venue; constructing both a manmade fishing lake, and swimming lake, along with spacious lawns, a bath house, restrooms, walking and biking paths, all nestle beneath mature trees. There are no overnight sites, so don’t plan on leaving your vehicle in the parking lot while you’re upstream.

I give this paddling adventure a four and a half star rating. It is definitely best once the high water has receded, and before the end of July, when it becomes so low you must portage. Finding good campsites was challenging, as there was a lot of wet clay/sand mix along the shoreline. Rocky points, and gravel benches where numerous, but there were few with level land for tents behind them. There are several islands, but here again, ideal spots were missing.

Prairie River also pointed out the danger of rattlesnakes and black widow spiders along the river. While I anticipated an encounter with the former – in fact found one in the middle of the intersection as we approached the park, I never saw the latter. Having lived on the prairies my entire life, I was astonished to hear Black Widows existed here. We did see a bald eagle, deer, a falcon and lots of pelicans. The area is noted for its fossil bearing rock. Often rust red towers would spire upward, reminding me of the badlands in Arizona. At other times the banks looked so cool and green, so verdant I felt I was paddling through an English countryside.

The one regret we had, was not taking a moment to stop and acknowledge our achievement. In the scramble to get loaded and off the ramp, we left out celebrating the most valuable part of the trip – accomplishing it.

Kayaking, skiing, hiking, camping, are all activities I love because you live fully in the moment. One needs discipline to paddle the long hours, resilience to deal with the surprises and courage to meet the dangers head on. These are the same traits I build into the female protagonists in my books. If you like action suspense, check out my Daring Heights series. Climbing High shows you the world of rock climbing, while High Seas takes you kayaking off the west coast.  Sky High, the sixth and last book in the series, launches worldwide this fall, giving you a look into the mystery and danger of international trade in Hong Kong. Check them out on my website www.madelonasmid.com Five star ratings and available through amazon.com 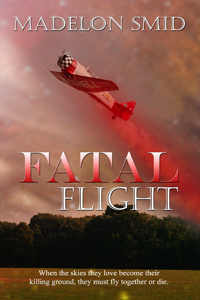 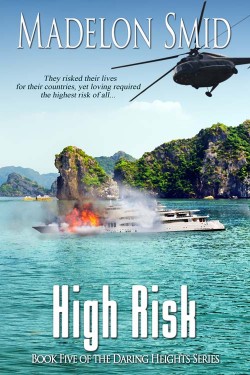 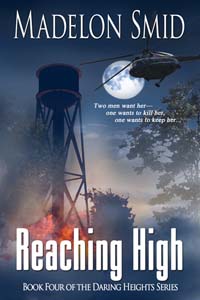 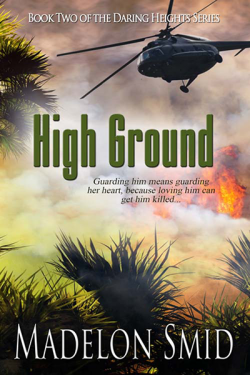 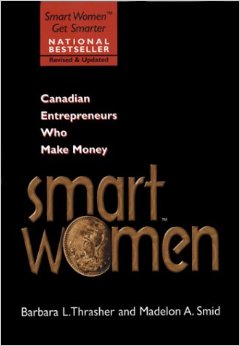